Boethius and the Consolation of Philosophy

Who was Boethius and why did he write the Consolation of Philosophy? Anicius Manlius Severinus Boethius was a Roman aristocrat who was executed in 424 or 425 CE.  Like Socrates, he was condemned to death based on false charges manufactured by his political enemies.  While in prison he wrote The Consolation of Philosophy, an enormously influential philosophical work that still resonates with many contemporary concerns.  The work starts with Boethius in his prison cell, weeping and complaining about his bad luck and unjust treatment.  Lady Philosophy brings him back to happiness by helping him understand his real human nature, the difference between true and false happiness, and the nature of God and the universe.

What is the goal of Boethius101.org? Boethius101.org is written by first year college students and is designed to introduce you to Boethius’ most famous work by discussing and engaging with the answers Boethius gives to ten questions. This is NOT a summary of the Consolation or a scholarly study of it.  Our goal is to help you see what a fascinating thinker Boethius is and to encourage you to read the Consolation for yourself.

Who are the authors of Boethius101? This was written by first-year students (class of 2018) in the Honors Program of Villanova University. This website was a class project for the fall of 2014 in the Interdisciplinary Honors Humanities Seminar.  Please let us know what you think of our work by sending an e-mail to teachphilosophy101_at_gmail.com.

Sources. All quotations are from Boethius, The Consolation of Philosophy. Trans. David R. Slavitt. Cambridge: Harvard University Press, 2008.  Some passages have been slightly modified to improve readability.

Acknowledgements.  We are deeply grateful to Professor Kevin Hughes, the guest lecturer for some of our Boethius classes, who provided us with so much insight to this fascinating text. 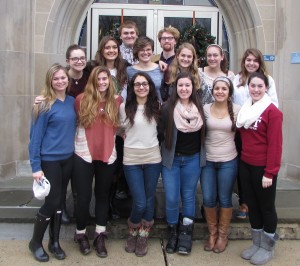 The students of the Villanova University
Interdisciplinary Humanities Seminar
Fall 2014

This work is licensed under a Creative Commons Attribution-Share Alike 3.0 United States License .